15 August 2017: Barbara Hendricks, Federal Minister for the Environment, promises support for the BGE

No, the Federal Minister for the Environment, Ms. Barbara Hendricks (SPD), will not give up on the year 2031 even before the search has really started. The year 2031 is the date when a site for a nuclear repository shall be identified, as prescribed in the Site Selection Act (StandAG). The repository is supposed to hold all the high-level radioactive waste from the nuclear power plants and probably even the low-level and intermediate-level waste retrieved from the Asse mine. On the occasion of her visit at the future BGE headquarters in Peine on the evening of 14 August, Barbara Hendricks confirmed her support for the current plans. At the moment, the administrative building on the outskirts of the town in Lower Saxony is still used as the headquarters of the DBE (German Company for Construction and Operation of Waste Repositories).

Ms. Hendricks was informed of the progress made in the merger of the DBE, the Asse-GmbH and the BGE, who took over a number of employees from the Federal Office for Radiation Protection (BfS) in spring. She confirmed, as she had stated before, that the BGE would grow in Peine in the future. The search process for a repository was indeed a new task that would be added to the original work, underlined BGE Chairwoman Ursula Heinen-Esser. Peine’s mayor Klaus Saemann and district administrator Franz Einhaus as well as Hubertus Heil (SPD), Ingrid Pahlmann and Steffen Kanitz (both CDU), local members of the federal parliament, were in particular pleased that Ms. Hendricks wanted to retain and extend the headquarters in Peine. “We have room for more in Peine”, said both Einhaus and Saemann. Mr. Einhaus hoped that more scientific knowledge would be needed in connection with the new company BGE and that new institutions might be established in Peine. Barbara Hendricks also suggested an endowed chair for repository sciences.

For one thing was sure: disposal and the dismantling of nuclear power plants “will be a task for the future”, as Kanitz said. And everybody agreed.

The three members of the BGE management board, Ursula Heinen-Esser, Dr. Ewold Seeba and Dr. Hans-Albert Lennartz as well as Dr. Thomas Lautsch, managing director of the DBE and future member of the BGE management board, presented the projects planned by the new BGE. Ewold Seeba was very pleased that, in the process of merging the companies, he had encountered “a lot of openness and a high willingness to be committed to the process”. The merger is supposed to be completed by the end of the year. He also thanked the works councils of the three companies for their contribution to the merger process.

Thomas Lautsch reported on the progress made in the construction of the Konrad repository, which is currently being developed to receive low-level and intermediate-level radioactive waste. However, it would not be available before 2022, as Lautsch said, since building work in an existing former iron ore mine was “an enormous challenge”. The Morsleben repository, on the contrary, is planned to be closed, “which makes it a very special project”, since this is done for the first time as well. This was all the more true for the Asse II mine, as Hans-Albert Lennartz commented when he presented the retrieval project. He spoke about the usual difficulties encountered in their routine work, such as getting rid of the roughly 12,000 litres of non-contaminated influent waters that arise every day. After a former salt mine had partly been filled with brine, i.e. saline water, from the Asse mine, the Asse-GmbH just entered into a new contract with the company K+S AG in order to store the waters in a different mine. Right after the first pieces of information had been published, a citizens’ initiative was formed in the community of Sehnde near Hanover. “There is still a stigma attached to the name ‘Asse’”, observed Lennartz.

Ursula Heinen-Esser described the different project phases on the way to identifying a site for a repository. As a first step, they would be looking for areas that needed to be excluded as potential sites for a repository due to the risk of earthquakes, volcanic activity or even mining activities in the past, she said. After that, sub-areas would be identified that might potentially be suitable. Explorations would be performed above ground and then below ground, in the framework of a comparative analysis. However, a decision with respect to the site of a repository would need further support from Berlin, said Heinen-Esser. This decision must be supported both by the owner, represented by the Federal Ministry for the Environment, and by the Bundestag, assisting in each step of the procedure with the relevant parliamentary decisions. So it says in the Site Selection Act (StandAG). Barbara Hendricks was convinced that the new structures “offer a real chance to be successful with these efforts”. 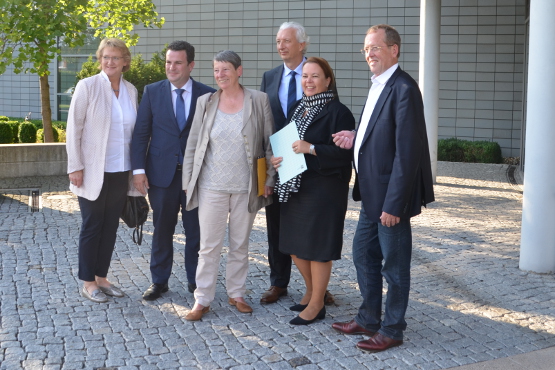