Radioactive waste in the Asse II mine

From 1967 to 1978, around 47,000 cubic metres of low- and intermediate-level radioactive waste were emplaced in the mine according to information from the former operator, the Association for Radiation Research (now known as Helmholtz Zentrum München, HMGU).

Almost all low- and intermediate-level radioactive waste from the Federal Republic of Germany was disposed of in the Asse II mine. Some 67% of the waste volume originated from facilities belonging to power companies. Typical waste included: filters, scrap metal, paper, laboratory waste, building rubble, wood, slurries and mixed waste. Other waste was delivered by research institutes, the nuclear industry and other waste producers (from the medical industry, for example).

Records allow the determination of how many drums are stored in the Asse mine, but there is some uncertainty as to whether these documents give a correct radionuclide and substance inventory for the emplaced radioactive waste. The waste declaration at the time does not meet today’s standards and is partially incomplete and incorrect. The BGE’s plans for retrieval assume that incorrectly declared waste was also emplaced in the Asse II mine. Since the facility came under the purview of nuclear law, considerable efforts have been made to eliminate uncertainties regarding the waste documentation. Even following very extensive inspections, there is no evidence that high-level radioactive waste is stored in the Asse mine.

The radioactive waste was emplaced in a total of 13 former mining chambers from 1967 to 1978. Two chambers are located in the central section and 10 in the southern flank of the mine at depths of 725 and 750 metres. A further chamber is located at the 511-metre level.

At the start of emplacement, the waste containers were stacked in an upright position. In order to make better use of the hollow space, the former operator subsequently began stacking them on their sides. The necessary individual handling of waste containers resulted in higher radiation exposure for staff and higher emplacement costs.

From 1971 onwards, the waste was primarily dumped using a wheel loader. The simultaneous handling of multiple drums led to lower costs and lower radiation exposure for staff. It is with the use of this method, if not sooner, that it becomes clear that the waste was intended to remain in the Asse II mine. There were no plans for retrieval, and possible damage to the waste containers was disregarded. The surrounding rock salt was intended to provide long-term protection.

An electric crane was used to lower intermediate-level radioactive waste into emplacement chamber 8a at the 511-metre level, where it was emplaced using the dipping technique. This method was used because, as a result of the significantly higher radiation exposure relative to the low-level radioactive waste, there was a need not only for a greater distance from the waste container but also for additional screening.

According to current laws and the state of the art of science and technology, the final disposal of radioactive waste in the manner employed at the Asse II mine would not be eligible for a licence. However, irrespective of the present-day assessment of emplacement operations at the Asse II mine, no laws were broken based on the legislation in force at the time.

The estimation of the repository’s hazard potential depends not only on the emplaced radioactivity of the waste, but also on the substances that are emplaced and the harmful effects they could have on living organisms. If the radioactive waste were to remain in the Asse II mine, it would not be possible to demonstrate that the legal safety objectives would be met for the required periods of time. The waste is therefore to be retrieved from the mine.

For further information on retrieval, please refer to the main topic on retrieval (German only). 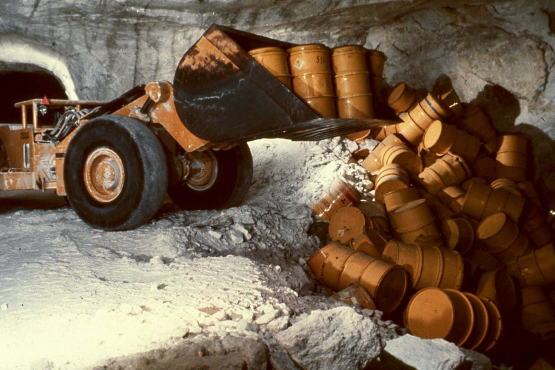 From 1971, waste drums were largely emplaced in the emplacement chambers using the dumping method. 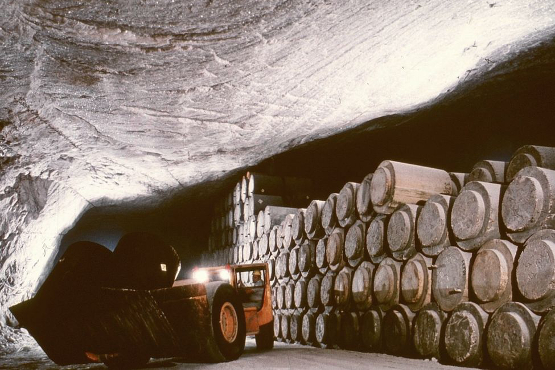 Drums with lost concrete shielding to reduce radiation exposure. The shielding is described as “lost” because it is emplaced along with the waste.