The BGE is mandated by the federal government to perform tasks in the final disposal of radioactive waste. The federally owned company was founded for this purpose in July 2016. The new company was created by a merger of the repository divisions of the Federal Office for Radiation Protection (BfS) as well as the operating companies Asse-GmbH and Deutsche Gesellschaft zum Bau und Betrieb von Endlagern für Abfallstoffe (DBE).

Since April 2017, the BGE has been the responsible operator of the German repository projects Konrad and Morsleben as well as the Asse mine. Further tasks are the site research for a repository for especially high-level radioactive waste and the maintenance operation of the Gorleben mine. Around 1,900 BGE employees at currently seven locations are responsible for the tasks in the repository sector.

The work and the organisational form of the BGE are based on the Atomic Energy Act (Section 9a, paragraph 3, sentence 2 AtG) and the Repository Site Selection Act (StandAG). The sole shareholder is the Federal Republic of Germany. There is no profit orientation. A supervisory board controls the work of the company. The BGE is currently being set up and is developing its final organisational structure as well as a common mission statement.

The BGE finances its work partly through a state-administered fund into which the energy suppliers have paid around € 24 billion and partly through tax revenues. With the aim of making corporate decisions in all areas more transparent, the BGE is committed to the currently applicable standards of the Public Corporate Governance Code of the Federal Republic of Germany. It contains essential provisions of applicable law on the management and supervision of companies in which the Federal Government has a stake as well as internationally and nationally recognised standards of good and responsible corporate governance. 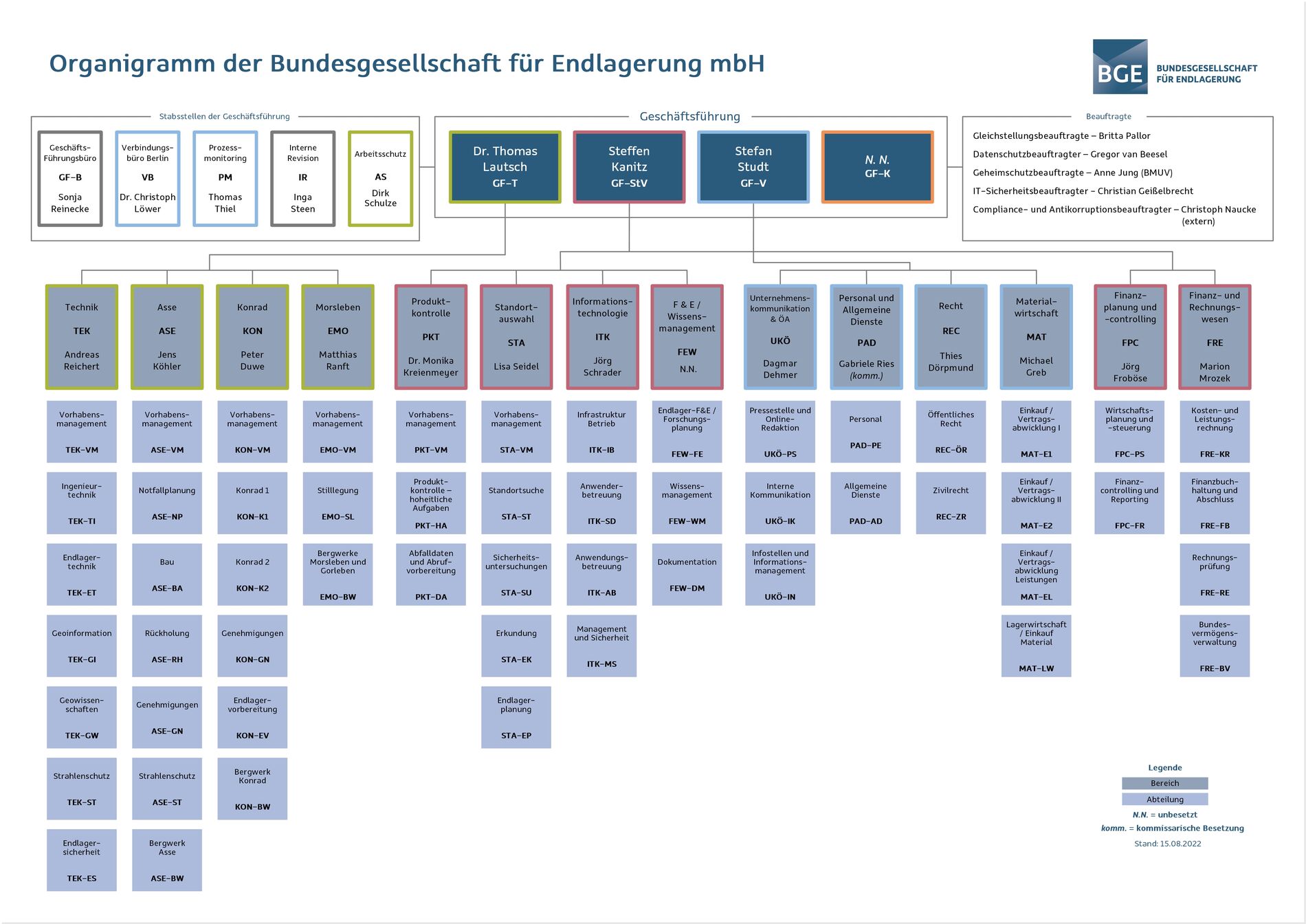 Organisational chart of the BGE (last revised: 15. August 2022)
– to enlarge, please click on the image

Documents on the subject

Company reports of the BGE

BGE is the sole shareholder of BGE TECHNOLOGY GmbH (external link). The subsidiary of the former DBE is active in the fields of international co-operations and projects, research and development, and repository safety.