The aim of the decommissioning concept is to keep the radioactive waste away from the environment for as long as possible. With this in mind, compliance with the legally stipulated safety objectives for the escape of radioactivity must be ensured for a period of one million years. This requirement is examined as part of a long-term safety analysis, and the development of the decommissioning concept is accompanied by comprehensive investigation programmes that must furnish not only computational but also structural evidence in support of the planned measures.

The decommissioning concept envisages three key measures: extensive backfilling of the mine, the construction of sealing structures, and the sealing of the Marie and Bartensleben shafts.

The extensive backfilling of the mine is intended to stabilise the repository and the rock above it and to reduce the risk of water penetration. Should water enter despite these efforts, the sealing structures are intended to separate the waste from the rest of the mine and also to isolate it from the environment. Ultimately, the shaft closures are intended to ensure that no gases or solutions can enter or escape from the repository via this route for long periods of time.

A license is required in order to carry out the decommissioning work. This is a decommissioning licensing procedure subject to nuclear law. As the operator at the time, the Federal Office for Radiation Protection (BfS) submitted the full set of corresponding application documents to the Saxony-Anhalt Ministry of Environment (the licensing authority) in 2005. Following a revision of the application documents, these were made available for public inspection in 2009. Almost 15,000 objections were submitted to the licensing authority, which held a public hearing in October 2011.

From that point onward, the procedure no longer followed its expected course. In 2013, the federal government’s Nuclear Waste Management Commission (ESK) reached the conclusion that the methodology of the long-term safety assessment was no longer in line with the state of the art of science and technology. The Federal Environment Ministry adopted the six recommendations set out by the ESK and instructed the BfS to implement them.

Since 2011, the BfS has been working to provide evidence that the sealing structures described in the concept can be structurally implemented. This challenge passed to the BGE when it assumed operating responsibility in April 2017, which also saw it take on the role of the applicant in the licensing procedure for decommissioning.

Until then, in addition to the tasks described above, the BGE must restrict operations to those necessary to keep the mine open (i.e. without emplacement) and must keep the repository in a suitable condition for decommissioning. 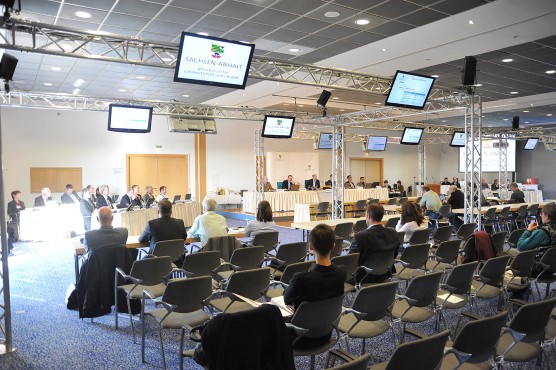 In 2011, the decommissioning application was put to a public hearing in Oschersleben (Bode) at the invitation of the licensing authority. 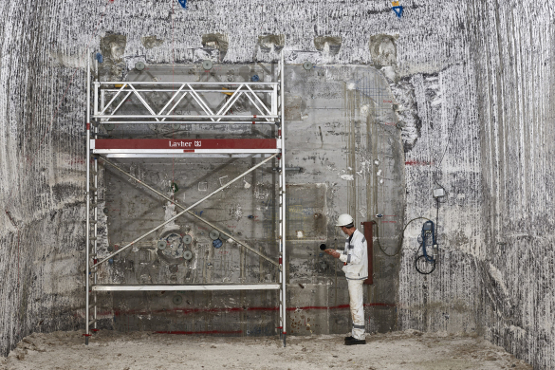 In order to demonstrate their functionality, the BGE has carried out a test in relation to the realisation of horizontal sealing structures in the rock salt. The image shows the front of the concrete structure, which is about 25 metres long.