22 May 2017: Central workshop on second level in successful operation

The central workshop on the second level of the Morsleben repository (mine working 1, south, Bartensleben shaft) has now been operated for 50 days. As a supplement to the workshop on the 4th level in the control area (area of tighter radiological monitoring), it facilitates the maintenance and repair processes for large devices underground and thus the operation to keep the mine open. Vehicles and machines no longer have to pass locks to enter or leave the control area, where they used to be examined for contamination.

On 28 March 2017, the 100-metre-long and about 15-metre-high workshop was taken into operation after it had been subject to an acceptance inspection under mining and nuclear law. The long construction period was due to the comprehensive mining preparations, which had taken over two and a half years. Among others, the overhead protection of the old mine working was ensured and a crane track was mounted to the roof of the mine working during this period. In the summer of 2015, one started to equip the workshop with a maintenance pit and a lifting platform, metal and electrical workshop as well as other infrastructural buildings (service station, oil supply and management station, office workplaces). 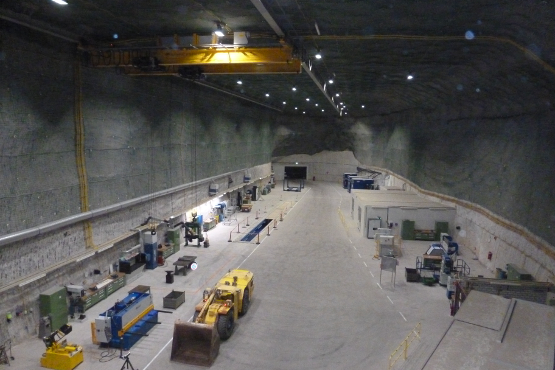