“The Asse II mine has become a symbol for Germany’s failed nuclear policy”, said Robert Habeck (Grüne). On 28 August, the Minister for the Environment of Schleswig-Holstein visited the mine near Remlingen that was officially referred to as research mine in the past and was later called repository. Habeck wanted to take a look at the situation himself, accompanied by a group of local party members. After a guided tour, professionally provided by Annette Parlitz, public relations employee at the Asse-GmbH, he came to the conclusion: “It can be vividly seen here what a tremendous task it will be to dispose of the radioactive waste in Germany.” Before the tour, Asse info centre manager Manuel Wilmanns had made it clear in his introductory speech that the radioactive inventory contained in the Asse mine is equivalent to only a fraction of the inventory contained in a castor container. “And we need to store approximately 2,000 of those safely”, underlined Habeck.

Habeck rejected the suspicion that several citizen’s initiatives express every now and again: They believe that the filing work performed to stabilise the fragile mine might serve to abandon the retrieval of the waste. “I was very impressed by the cracks in the ceiling”, said Habeck on his return from the mine shaft. “These people work against the mountain in order to make the retrieval possible. And if you work against the mountain, you must obviously be working against time, too”, declared Habeck.

In his greeting words, Prof. Dr. Hans-Albert Lennartz told Habeck how difficult it was to get rid of non-contaminated brine from the Asse. Habeck nodded understandingly. Lennartz is the Commercial Director of the Asse-GmbH and of the BGE that will be merged with the Asse-GmbH at the end of the year. Habeck has had similar experiences when he needed to dispose of non-radioactive construction waste from nuclear power plants that are being dismantled. He finally managed to convince some mayors in Schleswig-Holstein that taking the waste served a good cause and that the local population would not be in any danger if they accepted material that was even less radioactive than the natural background radiation. “These mayors and communities are very happy when they receive recognition on a larger scale. This makes it easier for them to accept the responsibility,” Habeck commented while visiting the 750 metres level. “Meanwhile, more and more mayors tell me that they also think about accepting some of the waste.”

Prof. Dr. Hans-Albert Lennartz, however, will be confronted with difficult discussions in Sehnde and neighbouring towns because non-radioactive influent waters from the Asse may soon be disposed of in the vicinity of these towns. Up to now, there was only one industrial customer who accepted these waters, getting paid for “being delivered one of his production resources”, as Lennartz pointed out.

Read more about the impressions from the underground visit to the Asse II mine in our blog. 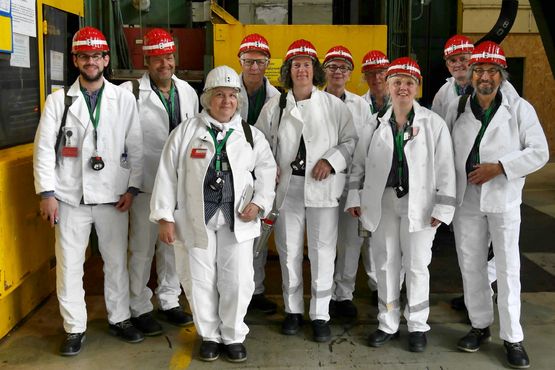