Never again shall a repository for high-level radioactive waste be imposed on a German region without warning – the way it happened in Gorleben in 1974. This is what the Federal Minister for the Environment, Barbara Hendricks, said on 5 September 2017 on the occasion of the opening event for the site selection procedure, hosted by the BGE in Berlin. For that reason, Hendricks and the Bundestag’s rapporteurs who are responsible for the topic of disposal scarcely left a stone unturned.

In the Repository Commission, Dr. Matthias Miersch (SPD), Steffen Kanitz (CDU) and Sylvia Kotting-Uhl (Bündnis 90/Die Grünen) had been committed to creating a completely new structure of federal authorities and to introduce comprehensive public participation in the search process. On Tuesday, the members of parliament reviewed the negotiation process – and shook their heads from time to time. Sylvia Kotting-Uhl vividly remembered the reactions to the first participation concept. When they had presented their ideas, first in the working group, then in the Repository Commission and finally in the parliamentary group, they had been asked again and again: “Are you completely mad?” Matthias Miersch reported that the introduction of a National Support Body as a real innovation was called the “destruction of democracy” by an expert in constitutional law. And Steffen Kanitz remembered that the parliamentary members of CDU/CSU “did not exactly rush” to participate in the Repository Commission.

BGE Chairwoman Ursula Heinen-Esser, who had been one of the two chairpersons of the Repository Commission, informed the participants of the progress made in the creation of the new company BGE. The BGE shall be a merger of the Department for Safety and Nuclear Waste Management of the Federal Office for Radiation Protection (BfS), the Asse-GmbH and the DBE. At the beginning of August, the BGE started the site selection procedure by requesting geodata from the state geological services and the mining authorities. This first data request was aimed at identifying areas that can be excluded from the outset, i.e. earthquake areas, volcanos and active mining sites. In a few weeks’ time, another data request shall be sent, applying the geological minimum criteria. The third step is about assessment criteria and creating a first report on potential sub-areas for a repository for high-level radioactive waste. Ursula Heinen-Esser underlined that both the site selection procedure and the work at the BGE are supposed to be designed as a “learning system”. “It must be possible to correct mistakes, and we will rely on an exchange with all of you”, she said.

Wolfram König, President of the Federal Office for the Safety of Nuclear Waste Management (BfE) and the “intellectual father of the new structure of federal authorities”, as Barbara Hendricks had said, is convinced that the selection procedure will only gain people’s confidence if it is monitored by an independent supervisory authority. His Office would closely monitor every step the BGE takes, said König. He added that his Office would also have to assume the legal responsibility for the site selection process. However, “we will not interfere with the BGE’s operations.”

Concern had been expressed that the BfE might not be up to the task of securing the site (§ 21 of the Site Selection Act), but König made a humorous comment and received much laughter: Half of the applications for deep drillings that had been submitted to the BfE were already processed, he reported, “there were two in total.” Drillings are subject to agreement by the BfE so that potential sites will not be ruined even before they can be explored.

Professor Dr. Klaus Töpfer, one of the two chairpersons of the National Support Body (NBG), warned that time pressure would have a devastating effect on the selection procedure. If no repository site has been determined by 2031, he would be satisfied with a decision in 2038. “Then I will be a hundred years old”, he said. He underlined that the participation process would take a lot of time. The NBG would not accept any suggestions that were held to be “without alternatives” because this would immediately destroy people’s confidence in the procedure. Töpfer was obviously very pleased with the three “randomly selected citizens” participating in the NBG. “They called for a linguistic disarmament that would not have been possible without them”, he reported. This gain in comprehensibility should become the guiding theme of the site selection for everyone involved. This and the time “that is needed for public participation” – that is what Klaus Töpfer hopes for.

Click here for more pictures of the event and speakers’ quotes. 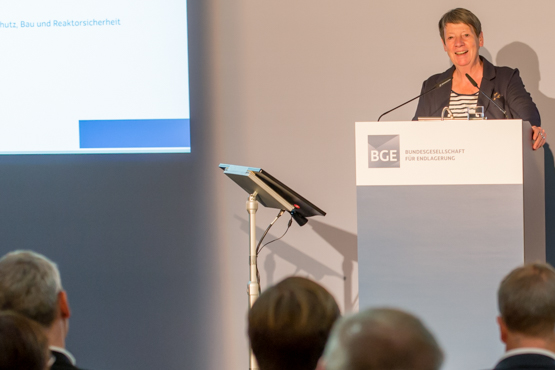 The Federal Minister for the Environment, Ms. Barbara Hendricks, welcomes the participants of the opening event.