A fire in a building on the Asse II shaft mine operational site, several missing persons in the building and a severe accident in the car park involving an escape of radioactive fluid: this was the scenario faced on Wednesday evening by the on-site fire service and the mine rescue team from the Asse II shaft mine, as well as the fire services from Schöppenstedt and Remlingen. In this major exercise, which also involved the Wolfenbüttel district authorities, the fire services tested their management of a complex fire situation.

At 18:22, the fire alarm was triggered automatically by smoke detectors. The on-site fire service ascertained that persons were missing. When a further accident was then reported in the car park, the fire services in the neighbouring districts were called and these arrived with aerial ladders and various rescue vehicles. In the car park, the scenario involved an accident between a fork-lift truck and a private car that had been crushed against a lorry. Driver and passenger were trapped and had to be freed from the vehicle using heavy-duty spreaders. In the scenario, the lorry was loaded with a fluid that was escaping due to the damage caused by the vehicle. The lorry was marked with a radioactivity symbol.

Fire officers cordoned off the accident site after they had ascertained that the fluid was wetting the car park. The mine rescue team, which has radiation protection training, thereafter locked in persons and material, so that the radioactivity would not be spread. The fire officers, who were tasked with rescuing the persons, thereafter continued their work wearing marks for their own protection. However, this part of the scenario is highly unlikely because radioactive fluid is transported only in quantities between one and two litres, due to its potential to cause damage.

At 19:48, the exercise was concluded. The injured were rescued, the missing persons were found and the fire was extinguished.

Two employees from the LBEG mining authority, Frank Printz from the Bundesgesellschaft für Endlagerung (BGE) and the Operation Manager of Asse-GmbH, Harald Hegemann, took part in the exercise as silent observers. Major exercises like this serve primarily to identify weaknesses so that these can be addressed. In the current exercise, the mine rescue team were not able to be called at the same time as the on-site fire service. “This seems to be a previously unknown software problem,” said Frank Printz. In addition, there were communication problems between the internal fire officers and the external services. The on-site fire service was not permitted to be incorporated into the digital communication among the local fire services. However, this is already under discussion, with the aim of legally converting the on-site fire service into a works fire service that is permitted to use the digital radio network. But these discussions have not yet reached a conclusion.

Following the exercise, the observers praised the handling of events. Frank Printz and Harald Hegemann were particularly satisfied that the radiation protection barriers had been maintained during the exercise and that masks were worn without complaint for the entirety of the major exercise. After the exercise, the exercise leader from the on-site fire service, Nils Bialojahn, said: “Thank you for the great scenario. It got pretty warm under my hat!” 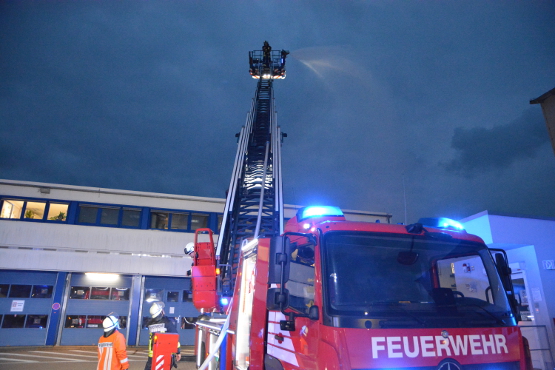 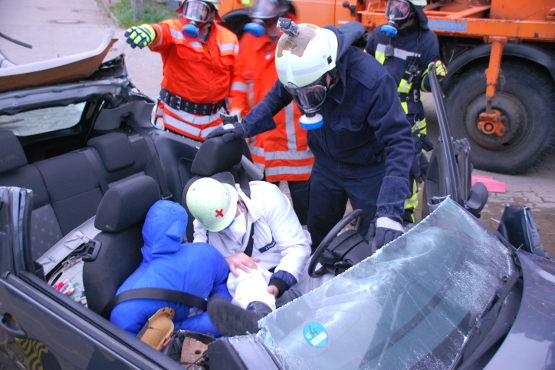 In this scenario, the accident victims had to be freed from the car after a suspected leak of a radioactive liquid.