The Konrad mine is the first repository for low- and intermediate-level radioactive waste to be licensed in Germany in accordance with the Atomic Energy Act. Project Konrad is a highly complex and extensive construction project. Nuclear law imposes stringent safety requirements and serves as the benchmark for activities during construction of the Konrad repository.

At the start of the previous legislative period, Federal Environment Minister Barbara Hendricks decided, on the recommendation of the Federal Office for Radiation Protection (BfS), to undertake fundamental restructuring measures with a view to eradicating structural deficits in repository organisation. Restructuring measures were implemented by means of the Act on the Reorganisation of the Organisational Structure in the Area of Final Disposal. As of 20 December 2017, the tasks previously performed by the Federal Office for Radiation Protection (BfS) and the Deutsche Gesellschaft zum Bau und Betrieb von Endlagern für Abfallstoffe mbH (DBE) are now in the hands of a single body: the Bundesgesellschaft für Endlagerung (BGE).

In anticipation of the legal merger of the participating companies and organisations, the Federal Environment Ministry asked the BGE to assess the status of the Konrad mine’s construction and to conduct a critical examination of the schedule. This evaluation was to be conducted with the help of an external expert body. For the first time, it was now possible to conduct a comprehensive assessment across the areas of responsibility of the former participants (BfS, DBE). In October 2017, the Management Board of the BGE commissioned TÜV Rheinland to carry out a corresponding review of the project. The results are now available.

Why was the study carried out? Why is it being published now?

As of 20 December 2017, the former operator of the Konrad repository – the “Safety of Nuclear Waste Management” department of the Federal Office for Radiation Protection (BfS) – and the former operating company – the Deutsche Gesellschaft zum Bau und Betrieb von Endlagern für Abfallstoffe mbH (DBE) – have merged to form the Bundesgesellschaft für Endlagerung mbH (BGE). Prior to the formal merger, the Federal Environment Ministry asked the BGE to assess the status of the Konrad mine’s construction and to obtain an initial overview of the definitive schedule for the first time. In October 2017, the BGE Management Board commissioned TÜV Rheinland to carry out a corresponding review of the project’s scheduling situation. The results are now available.

Could the Federal Environment Ministry not have foreseen the delay much sooner and therefore been able to prevent it?

Thanks to the merger, it is now possible to assess the project status in a holistic manner for the first time. The previous organisational framework prevented better management of the project, especially given that the actual construction was in the hands of not one, but two organisations – the operator (BfS) and the third party DBE, which had been commissioned to carry out the planning and implementation (section 9a(3) sentence 3 of the old version of the Atomic Energy Act). The BfS was bound to the DBE by an inadequate cooperation agreement from 1984 that could not be terminated by giving notice, and it was not possible for the federal government to control the DBE under company law. The Federal Environment Ministry had no direct influence over the DBE from a technical supervisory perspective. In turn, when it came to technical supervision of the BfS, the non-terminable cooperation agreement meant that it was not possible to resolve conflicts between the BfS and the DBE.

Why should problems be easier to solve now? After all, you’ll still be working with the same people and are simply implementing restructuring measures. How will that help?

The BGE is under new management and has a team of highly qualified staff at its disposal. The problems stemmed from the inefficient organisation of final disposal activities in the past, not from the competence of the BfS and DBE staff.

When will Konrad be finished?

The report from the expert body specifies the first half of 2027 as the completion date, taking account of the uncertainties that can be assessed at the present time. In particular, these uncertainties include that the Konrad mine is the first repository licensed under the Atomic Energy Act. TÜV Rheinland has therefore made a conservative estimate of the length of the necessary preliminary inspection procedure under nuclear law based on experience in relation to nuclear facilities. In addition, in the current phase of the project, there are still a number of building contracts to be concluded. Above all, contracts for the building to receive the waste packages are yet to be awarded. The market is also characterised by a low level of competition, with only a few specialised companies and expert bodies that are even suitable for performing the tasks. The expert body also took this uncertainty into account when estimating the completion date.

The experts point to old contracts and differences of opinion between the various actors as the cause of the delays. What are they referring to?

The experts are referring to contracts that, in some cases, were signed before 1990. Planning for the Konrad repository began in the 1980s, and there are significant existing contracts that the customer and contractor interpret differently in terms of which work must be delivered to what standard. The previous cooperation agreement, which could not be terminated simply by giving notice, meant that these sorts of contractual problems could not be resolved – or could only be resolved following lengthy negotiations.

Do the experts also believe there is potential for optimisation that could help to save time?

Since the reorganisation, the previously unclear division of tasks, responsibilities and powers between the BfS and the DBE has been resolved. It is now possible to simplify workflows within the BGE. An acceleration of construction work can also be achieved through the targeted extension of working hours at the construction site. Lastly, there is potential for further improvements in project risk management and therefore also more rapid implementation of suitable compensation measures.

What does the delay mean for dismantling work in the various federal states? Will that be subject to delays too?

The delay in the Konrad repository’s commissioning does not affect the dismantling of decommissioned nuclear power plants in Germany. For radioactive waste from the operation and dismantling of power reactors, sufficient interim storage capacity is, in principle, available at the plant locations or at decentralised interim storage facilities. This capacity is able to compensate for delays in the transport of radioactive waste to the Konrad repository.

In light of the new insights into the commissioning of the Konrad repository, the Federal Environment Ministry will request an assessment of the interim storage capacity from the BGZ Gesellschaft für Zwischenlagerung mbH, which the Act Reorganising Responsibility for Nuclear Waste Management (VkENOG) tasks with the interim storage of product-controlled waste from nuclear power plant operators that has been conditioned for emplacement in the Konrad repository.

Will the plans for the Konrad repository be adhered to?

Dealing with scheduling challenges does not call into question the safety and suitability of the repository. By virtue of the planning approval, which entered into force in 2007, the system has been approved on the basis of extensive safety analyses. Throughout the construction process, developments in the applicable technical regulations have been and will continue to be taken into account. There is no evidence of safety defects. Nevertheless, as a responsible operator, the BGE is conducting an evaluation of the safety requirements in light of the state of the art of science and technology prior to commissioning.

Could a shorter emplacement time make up for the delay in completion?

When it comes to the operation of the Konrad repository, the logistics centre provided for in the Waste Management Transfer Act (EntsorgÜG), and whose establishment is stipulated in the coalition agreement, could pave the way for significant simplifications in delivery logistics, as well as in rapid emplacement logistics.

The Federal Environment Ministry has commissioned the BGE to organise the emplacement itself, operating the repository on a two-shift basis. This two-shift operation was already taken into consideration as an option in the planning approval for the Konrad repository. During the emplacement process itself, it could increase capacity and significantly reduce the time needed for emplacement.

Does this mean that everything will now be more expensive? Who will actually have to pay for it?

Yes, the Konrad repository will be more expensive. At present, the total cost of building the repository is estimated at €4.2 billion. Increases on previous estimates result not only from the longer construction period, as forecast by TÜV Rheinland, but also from additional work due to adapted construction processes. The €4.2 billion does not include the €930 million of exploration and planning costs incurred from 1977 to 2007. Funding depends on the proportion of waste to be disposed of, with 60% stemming from the funds provided by the power companies as part of the nuclear phase-out in order to finance nuclear waste management and around 35% stemming from tax revenues (for waste from EWN and the research facilities). The remainder (about 5%) will be paid for by private waste producers, such as those involved in fuel production in Germany. Potential additional costs will be offset by savings during the operational phase, which can be achieved by reducing the time taken for emplacement. 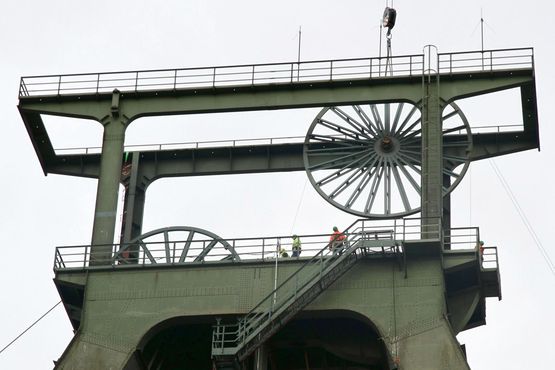 In 2017, the northern man-haulage shaft was withdrawn from service. The miners are now renovating the northern half of the shaft. 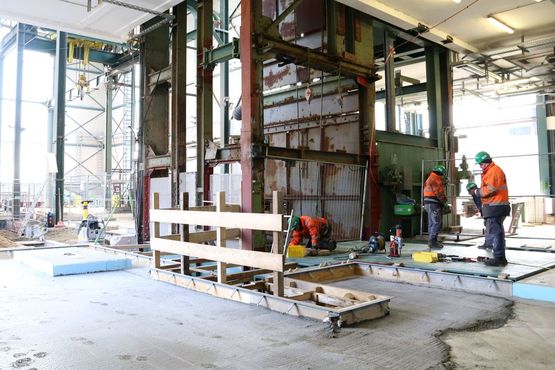 In the shaft hall, workers install a baseplate in the near-shaft area. Here, a working platform will soon be suspended in the northern half of the shaft for use in the renovation work. 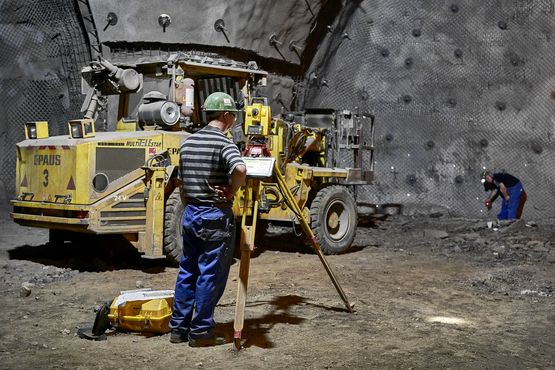 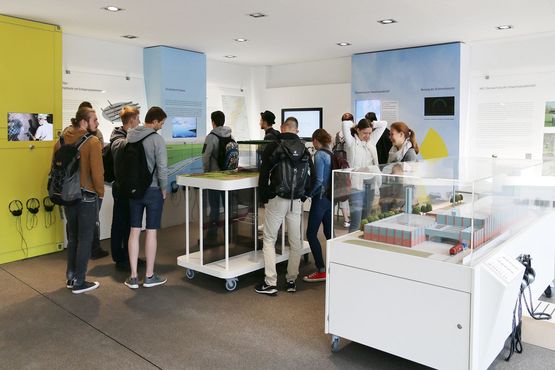 A group of visitors at Info Konrad.

If you would like to see what the conditions underground are like for yourself, we would be delighted to give you a tour of the Konrad mine.

Take a look at the main construction projects and experience the climatic conditions in which the miners work. For further information or to sign up for a tour, please contact Info Konrad.