Since 2012, storage chamber 7 at the 750 metre level of the Asse II shaft mine has been under investigation through a series of boreholes. Currently, investigations are underway with a special drilling technique to find the highest point of the storage chamber. It is expected that an air pocket can be found here. The aim is to make statements about the composition of the air found there. Because of the damage to the chamber ceiling, it can already be assumed that increased radioactivity will be found during drilling.

On 16 August, the drilling works were continuing as planned when the propulsion of the drill was disturbed. The borehole is flushed with compressed air. This pressure fell. The air flowing back from the borehole is measured continuously. The measurement instruments showed an increase in the radon level to a maximum of 17,000 Bq/m³. As a result, employees in the control area established radiological protection measures. The drill string was removed and the borehole was closed up.

Measurements from the drill string have found radon decay products. The alpha radiation recorded by a swab test was 0.1 Bq/cm². The air flowing back from the borehole is diverted through a measurement device to a filter and then discharged. The radon measurement values of this air immediately fell again after drilling was stopped. The measurement results are being analysed further.

A camera inspection of the borehole took place on the same day. The camera inspection showed that a cavity had been discovered by the drilling. Whether this was the storage chamber or a cavity that had been created in another way must be established by further measurements. On Thursday a gas measurement will be carried out as planned by external experts. Further procedures will be decided after that.

There was no danger to employees or the environment at any time. 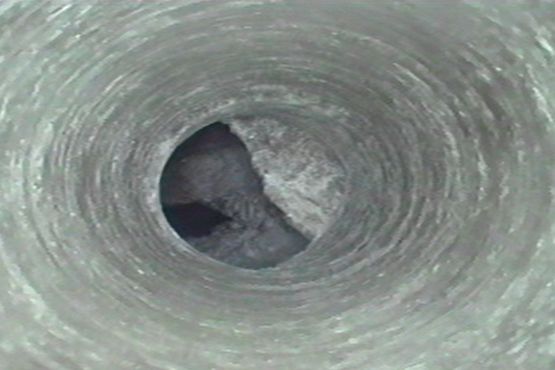 View into the borehole for the investigation of chamber 7