A large number of stakeholders are involved in the search for a repository for high-level radioactive waste. At this point, we would like to introduce the most important players.

The Federal Environment Ministry as technical supervisor also bears the overall political responsibility in the area of final disposal. The Ministry is a shareholder of the BGE and also supervises the BASE.

Federal Office for the Safety of Nuclear Waste Management (BASE)

As supervisory authority, the BASE exercises legal supervision, is responsible for public participation, and provides information about the site selection procedure. It examines the proposals of the BGE and determines (twice in the procedure by means of an official notice) whether the previous procedure was carried out in accordance with the provisions of the Repository Site Selection Act. These decisions can be reviewed by the parties concerned before the Federal Administrative Court. Throughout the entire procedure, the Repository Site Selection Act provides for various committees and formats through which citizens can continuously participate in the search for a repository. These are the Sub-areas Specialist Conference, the Regional Conferences, and the Council of Regions.

BGE implements the site selection procedure as project sponsor and operates the Asse II mine, the Konrad repository, and the Morsleben repository. It identifies a proposal for a site for a repository for high-level radioactive waste through sub-areas, siting regions, and sites in accordance with StandAG, prepares the respective exploration programmes, carries out safety investigations for potential sites, and will be responsible for constructing and operating the repository. In doing so, the BGE cooperates with research institutes within the portfolio of the Federal Environment Ministry and the Federal Ministry for Economic Affairs and Energy and can also call upon other scientific institutes.

The NBG is an independent, pluralistically composed social board. Twelve of the 18 members are appointed by the Bundestag and Bundesrat. These include scientists as well as other recognised personalities. Six members are randomly selected citizens, who are chosen in a complex selection process. Two of them belong to the younger generation. The range of members reflects the diversity of society. The task of the NBG is to support the search for a repository for high-level radioactive waste in an independent, transparent and citizen-oriented manner. The NBG has a comprehensive right of inspection of files at the BGE.

Full public participation is foreseen at all times. The Repository Site Selection Act also provides for citizen dialogues and citizen meetings as well as regional conferences in which citizens can participate in the site selection procedure.

Until April 2017, the BfS was responsible for the repository search and the operation of the Asse II mine as well as the Konrad and Morsleben repositories. In the area of ionising radiation, the BfS is concerned with X-ray diagnostics in medicine, safety in handling radioactive substances in nuclear technology, and protection against increased natural radioactivity. The fields of work in the area of non-ionising radiation include protection against ultraviolet radiation and the effects of mobile telephone systems.

The Repository Site Selection Act was passed by the Bundestag in May 2017. The Geological Data Act also came into force on 30 June 2020. This law makes it possible to publish the data basis for site selection. In the course of the site selection procedure, the federal legislator is called upon to take action three times in total: 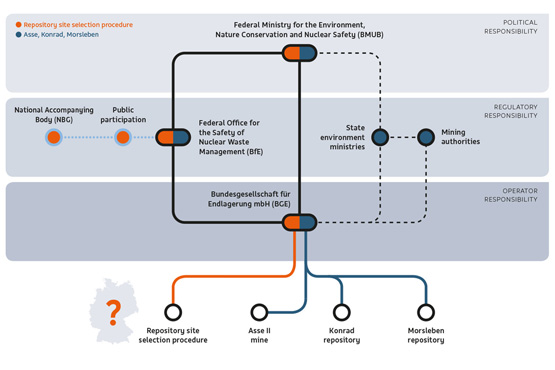 Stakeholders responsible for the permanent storage of radioactive waste